The Wreck of the SS Kakapo

The SS Kakapo was a steamer built by the Grangemouth Dockyard company in 1898. She was on her maiden voyage to Sydney, with Captain Niels Peter Fischer Nicolayson, a newly ticketed Captain at the helm. She was carrying coal ballast at the time.

On that fateful day in May 1900, the unforgiving Cape of Storms was in full force with extremely poor visibility, fog, strong winds and high seas. Captain Nicolayson saw Chappies and mistook it for Cape Point and issued the instruction to turn "hard-a-port", full steam astern.

It was too late to change the command, the vessel's forward momentum at a rate of 9 1/2 knots, rushed the beach at full speed and the ship sadly ran aground.

"We are of opinion that the vessel was not navigated with proper or seamanlike care after 4 p.m., and that the captain was not justified in keeping his vessel at full speed in spite of thick and stormy weather, and the erratic behaviour of the compass, and in not using the lead, and that the stranding of the "Kakapo" was due to his act or default. We do therefore adjudge that the certificate of the master, Niels Peter Fischer Nicolaysen, be suspended for a period of three months."

Thankfully, no lives were lost in this incident, as the crew of 20 managed to jump ashore. Attempts to tug this vessel off the beach were unsuccessful and as a result, she was partly scrapped where she lay, with some metal plates being used by the railway industry.

Legend originating from Noordhoek states that the captain was so distraught that he refused to leave the ship. It's alleged that he lived on board the Kakapo for a further 3 years before being removed and sent to an asylum! 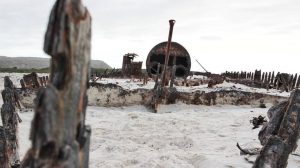